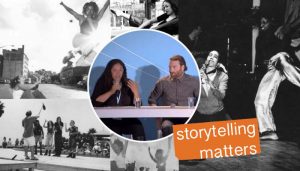 A personal journey from analog to digital

A prelude to the Making a New Reality series

In 2008 my life took a turn from the world of live performing arts and tangible visual arts to an increasingly more virtual engagement with arts and creativity. I went from a primarily analog world to a primarily digital one in a period of rapid innovation and fundamental changes to the human communication architecture. This personal journey has informed a long-form research project that I’ve been conducting with support from the Ford Foundation’s JustFilms program and will be publishing in the pages of Immerse over the next several months.

The JustFilm’s commission enabled me to intensively listen to a host of voices answering the questions: How do we provide robust support for those working to further equality through emerging media? and How do we ensure equality in the industries of emerging media?

The progress of racial justice and the development of technologies are not linear. Every time you develop a new technology, you need to have a thought process about the history and system of oppression that the technology is being created, and released, into. Think about ways to bend the technology to justice and not allow it to replicate, entrench, and worsen injustice.

— Joshua Breitbart, Senior Advisor for Broadband at the Office of the Mayor, New York City

Transforming alongside the world

As a long-time cast member of an Off-Broadway show, the owner and artistic director of a dance theater company, a teaching artist, and a strategist for one of the largest traditional art campuses in the country, the transition into the primarily tech-driven environment of emerging media made me feel like Alice falling down the rabbit hole into Wonderland. First, I became a producer and artist on a landmark transmedia art project archived at the Smithsonian, then a producer for the top transmedia production studio in Hollywood, then the director of the New Frontier Lab Programs at the Sundance Institute.

It was a huge adjustment to be the outsider turned insider, and not just because I transitioned from engaging with some of the oldest art forms to some of the newest, but because I have an intersection of identity backgrounds that are not well represented in Silicon Valley, Hollywood, gaming or corporate America (some of the fields that converge in emerging media). As an insider, I’ve noticed a lot of details that seem curious, both in the awesome and fearsome sense of the word. Now, in 2017, I can tell the story of a woman of color, social justice advocate and single mother of three who stands near the epicenter of a media paradigm shift and has a front row seat to the process of power replicating itself.

It has been a cherished and privileged journey, but also a disturbing one that has shaken my core. I’ve been witness to the pitfalls of new technologies born into systems of oppression that caused me to deeply question the possibility that justice and equality could ultimately prevail — though there have also been profound moments where small interventions made a significant impact on furthering inclusion and fair distribution of power.

Over the 80-plus years of its history, the the Ford Foundation has made catalyzing interventions in media, including establishing the framework and seed resources for public television in the United States, and supporting the rise of the independent media field, including the field of independent documentaries. Currently, Ford Foundation’s JustFilms initiative has a robust history of funding moving image media makers and the organizations that support them in seeking to reduce inequality in all of its forms through social justice storytelling. As part of the Creativity and Free Expression Program, JustFilms supports projects, organizations and networks working across film, and increasingly in emerging media, that inspire imaginations, challenge stereotypes, and help transform the conditions that perpetuate injustice.

Seeing the new story technologies emerging and being applied to social justice issues, Cara Mertes, the Director of the JustFilms program, commissioned this global field scan and analysis to identify the kinds of interventions that might tip the scales of emerging media toward justice and equality.

I’ve been witness to the pitfalls of new technologies born into systems of oppression that caused me to deeply question the possibility that justice and equality could ultimately prevail — though there have also been profound moments where small interventions made a significant impact on furthering inclusion and fair distribution of power.

Through a series of eight articles over eight months, Immerse will publish the results of the Making a New Reality research project. Each post will provide a summary of major findings with links to detailed segments of the research. What this research makes clear is that the scale of disruption in creative media making, distribution and moving image storytelling will touch every aspect of the way societies are organized. The goal is to help Ford Foundation, as well as its grantees, peer philanthropy organizations, and the greater community of changemakers better navigate disruption on a scale seen only once a century.

Ultimately, I hope this series will fuel a broad-based and vigorous discussion, as well as informing actionable, critical interventions that can improve equity and inclusion in emerging media and ensure that a broader set of stories are influencing our collective vision of the future. This is our challenge.

The thought leaders I interviewed had varying ideas for interventions that, as interviewee Jennifer Arceneaux observed, fall into four focus areas:

The goal of these interventions is to disrupt the centers of power to ensure that diverse voices are included and represented at every level of these industries.

The goal of these interventions is to disrupt the power imbalance that exists between code-literate and code-illiterate communities, in terms of designing human-centered futures and equitable economic systems.

The goal of these interventions is to develop approaches to media distribution that are decentralized and diverse, while building a brand that can incorporate multiple content types and attract audiences.

Shifting Attitudes — interventions into the consciousness of people through strategies that mitigate bias.

The goal of these interventions is to encourage equality by helping people learn to mitigate their own negative biases about others and themselves.

Developing solutions in dialogue with you

Forthcoming posts in the Making a New Reality series will include :

This is not meant to be a definitive or comprehensive set of documents on equality in emerging media. It is meant to be a catalyst for collaborative reflection and discourse that may help us resolve the issues raised. Each article invites responses from the field so that we might mitigate blind spots and find effective strategies for achieving equality and justice in emerging media.

We look forward to finding out how your own experiences have given you inspiration.

Share on FacebookShare on Twitter
An Urgency to Speak our Truth: Artists, Archives, & ActivismFALLING BACK, SEEING FORWARD: Creativity, Culture, Community