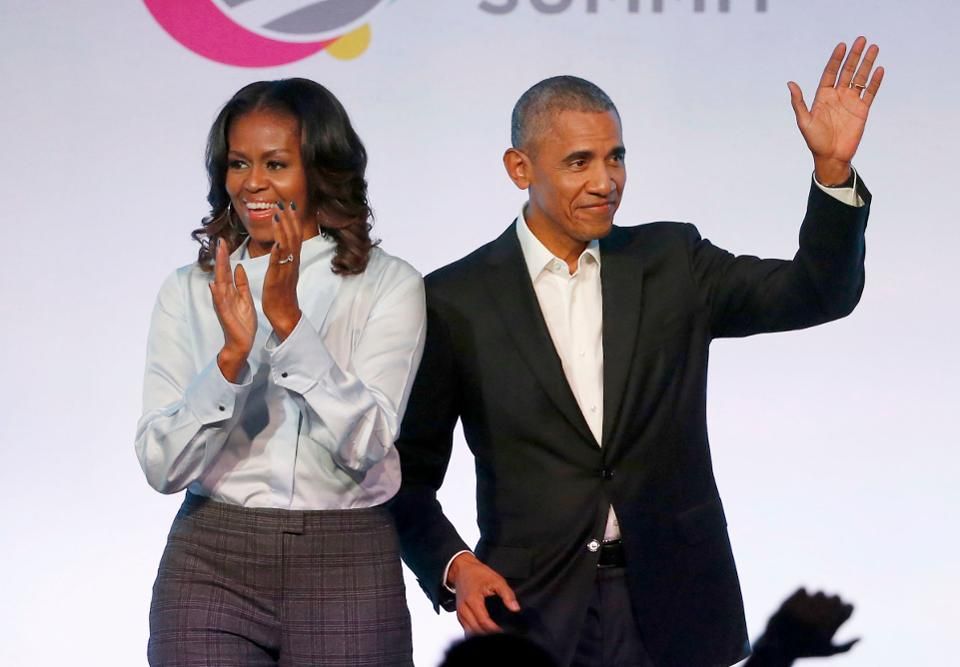 Former President Barack Obama, right, and former first lady Michelle Obama appear at the Obama Foundation Summit in Chicago. The Obamas have unveiled a slate of projects in development for Netflix, a year after the former president and first lady signed a deal with the streaming platform. The Obamas’ production company, Higher Ground Productions, announced Tuesday, April 30, 2019, a total of seven films and series that Barack Obama said will entertain but also “educate, connect and inspire us all.”(AP Photo/Charles Rex Arbogast)

by Sarah Kim | Reprinted from Forbes

On Tuesday, Barack and Michelle Obama announced that they’ve signed a deal with Netflix to release seven films through the Obamas’ new production company, Higher Ground. The Obamas launched Higher Grounds in spring of 2018 in hopes to create story-telling content that amplifies the voices of often underrepresented communities.

“Crip Camp will take viewers deep inside a revolutionary era and on a wild trip; a ride from oppression to empowerment, from infantilization to freedom – the trip of a lifetime,“

“Touching on issues of race and class, democracy and civil rights and much more, we believe each of these productions won’t just entertain, but will educate, connect and inspire us all,” Former President Obama said in a press release.

Included in the seven films on premiere on Netflix is Crip Camp, a feature-length documentary film supported by the Sundance Institute. It will portray a story of a summer camp for teenagers with disabilities that took place in the early 1970s. This camp laid the backdrop for the disabilities rights movement, which eventually led to the passage of the Americans with Disabilities Act in 1990.

“Crip Camp will take viewers deep inside a revolutionary era and on a wild trip; a ride from oppression to empowerment, from infantilization to freedom – the trip of a lifetime,“ according to the film’s website.

The documentary is co-directed by Nicole Newnham and former camper Jim LeBrecht. It’s co-produced by Sara Bolder and traces the journeys of campers up to the present day. LeBrecht has over 35 years of experience as a film and theater sound designer and mixer, author and disability rights advocate. His film credits include The Island President, The Waiting Room, Audry and Daisy, along with over 145 other films.

The inclusion of this film in the Obamas’ production lineup is a massive step in the right direction. There is a long history of people with disabilities being misrepresented, defamed and underrepresented in the mainstream media. Crip Camp has an excellent potential of recalibrating the disability narrative in the direction that is long overdue and needed.

Along with other marginalized identities, disability has been often erased or ignored in writings and stories of American history. So, perhaps this film will be the beginning of the restoration of these narratives, and open doors for healing and redemption.

It is incredibly admirable that the former President and First Lady are using their platform to bring attention to issues and communities that often have been silenced or marginalized, especially the disability community. The Obamas serve as authentic allies and supporters of this community.

Among the forthcoming projects are American Factory, a documentary about the Chinese billionaire who opened a factory in an abandoned General Motors plant; Bloom, a post-World War II drama series that follows stories of struggles and success endured by women and people of color; Overlooked, an anthology series based on New York Times’ obituary section; a film adaption of biographer David W. Blight’s Frederick Douglass: Prophet of Freedom; Fifth Risk, a series about those who protect and guide our government; and Listen to Your Vegetables & Eat Your Parents, a series for preschoolers that tells a story about food.

Creative Resilience in a Time of Pandemic