When the intimate filmed portraits of grief, faith, childhood, survival, art and transgender life debuted at Landmark Spectrum Theater in Albany earlier this year, the 11 young Capital Region artists who created the documentaries saw their publicly screened work as a reassurance they were filmmakers. For Bhawin Suchak, co-founder and co-executive director of Youth FX, having the community see a formidable group of young Black and brown filmmakers was a statement.

“These are young people that are in your community that you pretty much ignore,” Suchak said, recalling the screening. “Here they are. This is what they can do if you give them space, access to the tools and care.”

The 11 filmmakers are part of Arts2Work, a national program created by The Alliance, a national network of media arts organizations, focused on training the next generation of filmmakers from historically underrepresented communities. This October, Youth FX wraps its first year as a certified Arts2Work training center. 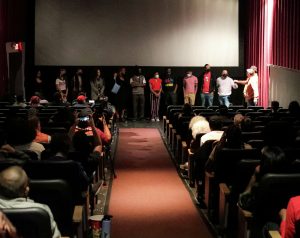 Youth FX, a community-based film production and education organization founded in 2008, wanted a new program targeted at young, aspiring filmmakers who had aged out of Youth FX’s existing school-aged programs that would help build a formidable workforce that’s primarily composed of people of color.

Conveniently, The Alliance, a national network of media arts organizations, was developing a national, paid apprenticeship program with a similar mission around the same time.

“We brought in our elements of what we wanted to make sure that this program was not just top-down from this national organization but that it was really co-created,” Suchak said.

Youth FX did something no other Arts2Work program in the country had done: It reframed the apprenticeship as a fellowship. Suchak said the goal was to make it about creating a community of filmmakers who would build together for a year, not a competitive process.

While Youth FX received funding in 2019 to launch Arts2Work in Albany in 2020, COVID-19 postponed those plans, and the new fellowship didn’t get underway until November 2021. The delay gave the organization time to home in on the details of Arts2Work at Youth FX. When Gregory Marsh joined the staff as director of education in spring of 2021, he helped put the final elements to the program, particularly a mentorship component.

“When I came in, I felt very strongly about what I call educating the whole person,” Marsh said.

That meant looking beyond the technical skills to prepare the fellows for the workforce. Housing, health care, community support and mental health are critical to a successful career, but often overlooked, Suchak and Marsh said. Arts2Work fellows meet twice monthly with Marsh to check in, and he’s helped with everything from reviewing resumes to connecting fellows with affordable housing organizations.

Before picking up a camera, the fellows collaborated on community guidelines to follow throughout the program. They — all filmmakers of color, four of them non-binary — focused on what would make a safe workplace, from inclusive language to how they would handle conflict. 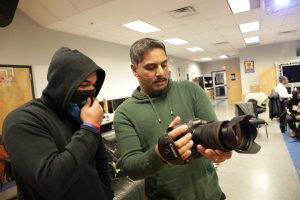 The sense of community is evident among the fellows. Hamlin, Miki Foster and Briola Nugent talked about their experiences with Arts2Work before a photography workshop on Sept. 20, actively listening to one another, quickly correcting a moment of misgendering  and making sure everyone has a chance to share. The workshop kicks off with a screening of a recap trailer for Youth FX’s summer 2022 program featuring current fellow Hamlin that is met with laughs and cheers. Hamlin’s 6-year-old daughter is welcomed and included during introductions. When it’s time to take photos of each other to explore manual camera settings and lighting basics, consent is asked before a shot is taken, and they spend as much time sharing shots, praising each other’s work and helping each other adjust aperture and shutter settings as they do taking pictures.

When it came time to use technology, Youth FX made sure the fellows were well equipped. Along with a monthly $600 stipend, each fellow received a MacBook Pro preloaded with Adobe Creative Suite and Final Draft, the industry standard for editing software, for the duration of the fellowship. Foster had always been interested in editing, but, like many of their peers, couldn’t afford Adobe Creative Suite ($360 a year) or Final Draft ($249 for the latest version).

“One of the bigger reasons this fellowship is so incredibly powerful and important is because it’s all POC — most of us don’t have those resources on our own,” they said.

The organization secured additional funding through the Department of Labor to buy six more cameras and lenses for Arts2Work, and Canon donated additional equipment. The fellows could sign out Youth FX’s equipment whenever, be it for personal projects or paying freelance gigs. Making the technology accessible was crucial, Suchak said, because it’s one of the primary barriers young filmmakers, particularly filmmakers of color, face. Without a camera, it’s hard to even create a pitch.

“There’s a reason why films are made by mainly white people, why studios are run by white folks who have legacy history, historical money,” he said.

Armed with their creativity, community and cameras, the fellows embarked on a yearlong series of workshops and projects covering all facets of filmmaking, including screenwriting, directing, sound editing and cinematography. They created the individual portrait documentaries that screened at Landmark Spectrum Theater. They’re currently working in small groups on larger documentaries, and the whole cohort will collaborate on a final narrative film. 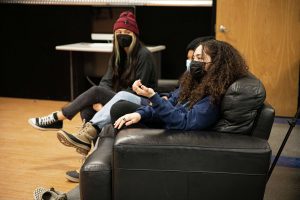 The fellows will leave with a full portfolio, including a website, to ensure they are prepared to enter the workforce, though many have already started working through NeXt Doc, a nationally recognized Youth FX program supporting documentary filmmakers of color; Rogue FX, the organization’s production company servicing the Capital Region; and freelance work. The cohort even got professional experience working as production assistants on “Mother’s Milk,” the upcoming thriller starring Hilary Swank, directed by Youth FX alum Miles Joris-Peyrafitte and shot in Albany.

Other Youth FX alumni including 2018 NeXt Doc fellow Cai Thomas contributed through workshops. Thomas came toward the beginning of the programming November 2021 and screened “Queenie,” her documentary on a Black, queer elder in New York City currently streaming on the Criterion Channel.

“To be in an audience of young people of color who are interested in documentary (filmmaking) and to hear their live reactions to the film … was special,” she said. “Filmmaking is very untraditional and for Youth FX to have the opportunity to run this program, to give people skills and to help them learn how to navigate through that process is really important.”

Change is slowly penetrating the film industry as the sets, stories and leadership continue to diversify, Suchak said. Arts2Work, along with the rest of Youth FX’s programming, is sending out the next generation equipped with the skills to determine what the future of filmmaking looks like.

“Instead of just being at the table, it’s building your own table and creating a world in the work that we want to do,” Suchak said.