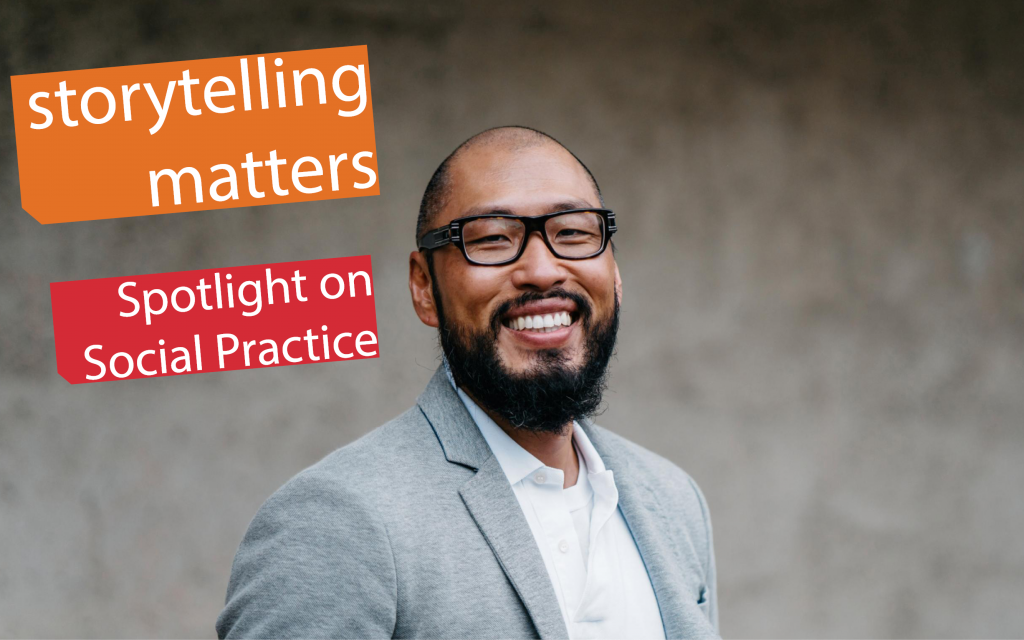 Zun Lee wasn’t all that interested in teaching students the ins and outs of taking pictures.

Editors Note: Zun Lee is an alumnus of the Alliance for Media Arts + Culture’s Creative Leadership Lab at Sundance. This article is reprinted from Davidson College News.

by Jay Pfeifer | reprinted from davidson.edu

“I’m not here to teach aperture or focal distance,” he said. “You can get all that stuff on YouTube.”

Instead, Lee talked about something bigger: The power of stories.

This past spring, the renowned photographer spent the semester on campus as the JEC practitioner-in-residence.

“Stories are everywhere,” Lee said. “In business, a client who is going to invest $50 million wants to know you understand their story. Physicians work with stories at the most basic level. They have to listen to their patients’ stories to understand the problem and then build a new story to communicate to the patient.”

It’s no coincidence that Lee mentions medicine and business. Lee earned an MD and MBA before he ever picked up a camera.

Raised in Germany by Korean parents, Lee practiced as a neurologist before going to business school and serving as a consultant in health care for nearly two decades.

However, in his 30s Lee learned that the man who raised him was not his biological father. His mother told him that she had an affair with an African-American man who was his real father. The discovery jolted Lee. And he picked up a camera as a form of therapy.

Five years later, Lee’s “Father Figure,” a black-and-white photo series that documented the everyday lives of black fathers, broke through, enabling him to step away from business to become a full-time photographer.

At Davidson, Lee saw a lot of himself in his students; smart kids determined to follow his path to med school or into business. Their admirable focus, however, could crowd out other interests, he thought.

“I want to twist people’s minds,” Lee said. “I’m not here to dissuade students from becoming doctors or getting a job at a consulting firm. But I want them to think about how storytelling can enhance their lives and their careers.”

Lee’s journey to Davidson started last year, when he came to West Charlotte on a Knight Foundation grant to serve as artist-in-residence with a non-profit. There, he crossed paths with Joseph Ewoodzie, the Malcolm O. Partin assistant professor of sociology.

“I’m not here to dissuade students from becoming doctors or getting a job at a consulting firm. But I want them to think about how storytelling can enhance their lives and their careers.”

For the past two years, Ewoodzie had been shuttling between West Charlotte and Davidson for SOC 337, “The Sociology of Beatties Ford Road,” a major West Charlotte thoroughfare. The distinctive course – taught in conjunction with students and faculty from Johnson C. Smith University — sends students into West Charlotte neighborhoods, giving them an opportunity to conduct sociological field research.

That’s a long way of saying Ewoodzie and his class knew a lot of people in West Charlotte. Lee, however, quickly built an impressive network.

“He knew the area better than I did actually,” Ewoodzie said. “And he’d only been there for a few months.”

Ewoodzie and adjunct anthropology professor Rebecca Ruhlen invited Lee to campus and immediately recognized that Lee’s voice could fit at Davidson. They pulled together an application for Lee to be a Justice, Equality and Community (JEC) practitioner-in-residence.

Lee’s semester-long stay was made possible by a 2017 grant from The Andrew W. Mellon Foundation. The $1.2 million gift sought to fuel new courses in the humanities, foster collaboration with the community and bolster active citizenship.

Lee packed a lot into one semester. He co-taught Ewoodzie’s Beatties Ford Road class and he guest-lectured to more than 20 classes, skipping freely across disciplines.

Hilton Kelly, associate professor and chair of Education Studies and the director of the Center for Interdisciplinary Studies, was blown away by Lee when he lectured to the five-class “Memory Studies” course.

“His life is a reflection of the interdisciplinary work we strive to do here,” Kelly said. “He’s a true Renaissance man in that he has moved from science to business to art and done it all so intelligently and easily.

“The problems we are facing in the world can’t be contained to a single field of study. We need to think across disciplines and Zun is a perfect example of that.”

The same qualities that allowed Lee to quickly become a part of the West Charlotte community made him very popular with students.

“They found him so relatable,” Ruhlen said. “I think a few weeks into his time here, he had his own group of mentees.”

Lee was more than just a pleasant presence, however. He was a deeply committed partner and mentor.

Lee helped Lawrence King ’19 wrestle with his senior project, a 50-minute documentary. King had to tease out a coherent film from more than 30 hours of raw footage.

Just days before the film’s premiere at the Verna Miller Case Research and Creative Works Symposium in early May, the two worked until after 2 a.m. on a Saturday night.

“He watched my drafts of the film and he gave me tips on selecting the most important pieces of my scenes so nothing was redundant, and he gave me some tips on what I could add to the film,” King said. “He was instrumental to the final stages of the project.”

Likewise, students in Ewoodzie and Lee’s Beatties Ford Road class came to lean on Lee as their fieldwork forced them to confront strong emotions.

“Some of our students entered a homeless shelter for the first time in this class. And they were really distraught by what they were seeing,” Ewoodzie said. “It stirred up combinations of pity, guilt and genuine concern for the well-being of the people in the shelter. And we need to get past those emotions to be effective researchers. Zun met with students outside of the class to help them talk about and process that.”

In those conversations, Lee found himself urging students to embrace the uneasiness they felt in a strange neighborhood or when they raised their hands in the classroom.

“I encouraged them to be vulnerable,” he said. “It’s hard not to be perfect — especially at a school like Davidson where every student has worked hard to get here and was one of the best in school throughout their lives. But the willingness to be vulnerable can be a great strength.”

Lee urged them to think of how far they had come and to find power in the broad scope of their lives. Those kids who wrote personal, searching essays to get into Davidson? They were still here and they could continue to grow.

“At the end of the day, after they graduate, I want them to think about what adds richness to their lives,” he says. “I want them to embrace the completeness that is borne of the liberal arts. I want them to be well-versed in life. I’m telling them, ‘Take your own stories and be proud. Value what you have done.’”